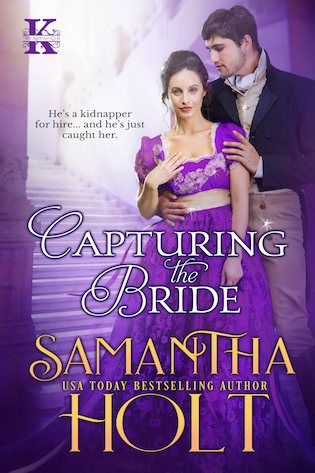 If one is very, extremely desperate, then one may call on the services of a clandestine group of men.
The Kidnap Club—known to few—specialize in helping women out of difficult situations.

Miss Grace Beaumont is at her mercy of her uncle who is determined she marry the depraved Mr. Worthington. Desperate times call for…well, the Kidnap Club.

It seems insane. Perhaps it is. But anything is better than being married to that man.

Lord Nash Fitzroy has looked after many a kidnapee over the past few years, but none make him want to break the cardinal rules as much as Grace. Her determined spirit, quick wit, and, let’s be honest, her pretty looks have him struggling to remember his role in this.

Protector, defender, and occasional shoulder to cry on.

His way with women and the almost derelict offerings of his ancestral home as a hideaway make him a perfect pretend kidnapper. He doesn’t much mind the money involved either, seeing as his father cut him off.

Which means, he cannot afford to get this wrong. No matter how tempted he is to show Grace that Worthington is not a prime example of how a man should be and burn the damned rule book.

She huffed and unfolded her arms. “I cannot help that I am boring, Nash. I am sorry I do not have a crumbling mansion and a mysterious past.” She lifted her hands. “This is me. I have little ambition and I like animals. That is it. I am boring.”

Nash rose to his feet before he had quite fathomed what he was doing. He strode over and took her elbows in his hands, drawing her up to meet him. Her lips parted and her eyes widened.

“Do not ever say that again,” he said firmly.

He curled a hand around her neck and kissed her. Hard. It took all of two seconds. Two mere seconds and they were pressed together, her lips beneath his. Two seconds to break all of his silent promises to himself, to Grace, and all those very real promises he had made to Guy.

She tasted so damned good, he couldn’t bring himself to regret it.

After a little squeak of surprise, she settled against him, and he wrapped an arm around her waist to bring her closer. Her fingers dug into his upper arms while he explored her lips with his—only briefly, long enough to gain entrance.

She made another sound, one that tugged deep inside him and made him harder than a stone statue. Her body softened further, and he gripped her to him tight, pushing the kiss hard and deep, sweeping his tongue into her mouth with a groan.

It was no good. He was lost to her.

USA Today Bestselling author Samantha Holt lives in a small village in England with her twin girls and a dachshund called Duke. If you’re not sure where to start why not try…

Amelia and the Viscount (Bluestocking Brides #1) for a fun, slightly hot shorter length read. Meet the Chadwick sisters and follow their adventures in each of their standalone stories.

You’re the Rogue That I Want (Rogues of Redmere #1) is a longer read with heat, witty dialogue, a feisty heroine and adventure. All books in the series are standalone.

Sinful Confessions is the first in the Cynfell Brothers Series. These are all novella length and standalone–ideal for a quick dip into the world of the sexy Cynfell brothers.

Wake Me With a Kiss is a sweet, fairytale romance. Twists on Beauty and the Beast and Cinderella are also available if you love a clean, fun read.

To Steal a Highlander’s Heart is a full length dive into the world of sexy highlanders. For those who love braw Scots, some steamy scenes, and medieval romance, this series is a perfect escape.