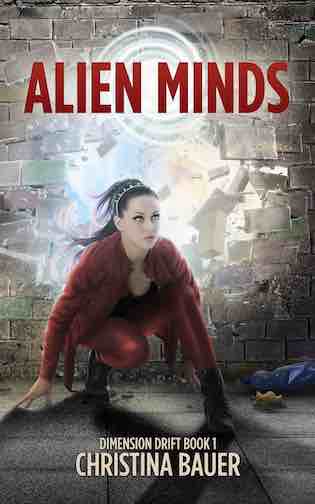 On my seventeenth birthday, I wake up in the hospital to find I just survived a sketchy but terrible accident. My parents stand by my bedside—both are beautiful, wealthy, and super-nice. They tell me that once I leave the hospital, I’ll attend the prestigious ECHO Academy, where I’ll churn out equations for the government along with my mega-smart peers.

So, I’m living the perfect life.

Then why does everything feel all wrong?

My parents, my house and even ECHO Academy…none of it fits. Plus, what’s up with Thorne, my brooding yet yummy classmate who keeps telling me I need to remember my true past, which seems to have included a lot of us kissing? That’s one thing I’d really like to remember, except for the fact that I’m pretty sure Thorne is hiding a ton of nasty secrets of his own, including the fact that he may not be from this world. But considering how my own past seems alien to me, it’s not like I can judge. Plus, Thorne has dimples. That’s a problem.

And worst of all, why does it feel so yucky to work on these calculations for the government? It’s all supposed to be part of ECHO, but my heart tells me that I’m helping something truly terrible come to pass. Thorne seems to think that kissing him again will release my real memories.

Maybe it’s time to pucker up.

This new series is perfect for: fans of urban fantasy, action & adventure, cool science, evil corporations, forbidden romance and hot new classmates who may or may not be aliens.

“Intoxication with technology is the hallmark of an underdeveloped society.” – Beauregard the Great, Instructions for Visiting Parallel Worlds

After spending hours on guard duty, I can finally leave Mass General. Soon I’m tooling my hoverbike toward the outskirts of the Boston Dome. Overhead, a cloud-free sky is projected onto the plasma. Tall buildings loom around me in a maze of chrome and concrete.

An image appears in my mind. Meimi—I never even think the false name Wisteria—lies curled on her hospital bed, drugged up and asleep. Every instinct in my soul says I should’ve stayed behind and guarded her while she rested. Not an option. An important appointment is coming up, and I can’t miss it.

Of course, Godwin—my boss and Meimi’s doctor—doesn’t know I’m leaving the city. Then again, the doctor doesn’t know a lot of things about me.

Like the fact that I’m not from this planet.

Plus, I’m not just any alien. My father’s the Emperor of the Omniverse, the universe of universes.

So what Godwin doesn’t know about me is quite a lot, actually.

Meimi doesn’t know much, either. To begin with, she doesn’t remember that I’m her transcendent. Even worse, she thinks I’m in league with someone as evil as Godwin. Not to mention that I’m part of a government creating an apocalypse for anyone who isn’t perfect.

Bands of sorrow tighten around my chest. There’s no avoiding the truth. Meimi sees me as her enemy. I straighten my spine. But being her enemy? That keeps my girl safe. So that’s what I’ll no do, no matter how much it tears at my soul.

Christina Bauer thinks that fantasy books are like bacon: they just make life better. All of which is why she writes romance novels that feature demons, dragons, wizards, witches, elves, elementals, and a bunch of random stuff that she brainstorms while riding the Boston T. Oh, and she includes lots of humor and kick-ass chicks, too.

Christina graduated from Syracuse University’s Newhouse School with BA’s in English along with Television, Radio, and Film Production. She lives in Newton, MA with her husband, son, and semi-insane golden retriever, Ruby.

Be the first to know about new releases from Christina by signing up for her newsletter: http://tinyurl.com/CBupdates