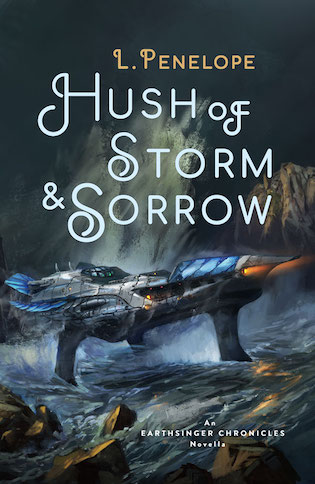 While battling a vicious winter storm, Roshon ol-Sarifor, along with his father and twin brother are kidnapped and thrust on a journey that takes them far from home—leaving his sister Jasminda believing them dead. Their captors claim that the Queen Who Sleeps is behind their abduction—She wants them to reclaim a magical object hidden in a deadly part of the ocean. But a violent encounter with a gang of pirates forces the ol-Sarifors to seek refuge on a smuggler’s ship, where Roshon meets a girl unlike any he’s encountered before.

Ani Summerhawk never met a risk she didn’t take. But with a price on her head, she and her older brother need to make a quick getaway from a deal gone bad. Every ship in the sea is seeking the reward for returning her to a ruthless captain who believes she’s his property. But when her brother agrees to transport three passengers to a dangerous destination, Ani’s heart is put on the line for the first time.

The two families battle a treacherous sea, greedy sailors, and a powerful mage as they struggle to retrieve and secure the ancient artifact. And the attraction between a high-spirited girl and a cautious boy comes to a head when they discover that their biggest fight just might be with each other.

Set two years before the events of Song of Blood & Stone, this action-packed novella answers the question of what happened to Jasminda’s family and sets the stage for the events in Cry of Metal & Bone (Earthsinger Chronicles, book 3).

Ani Summerhawk bounced on her toes. The anticipation of negotiations always made her giddy. Her brother, Tai, shot her a dark look, and she struggled to wrangle her excitement. Still, she couldn’t stop the tapping of her foot as the shadowy figures of four men approached.

The warehouse serving as their meeting place was lit with overhead bulbs that cast pools of light every twenty paces or so. The rest of the space was in shadow with the bulk of the crates and boxes forming an obstacle course of sorts. If things went wrong, there were plenty of places to hide, and she’d already scoped out the quickest paths to the two exits. Her exhilaration ratcheted up a notch, and she felt as if she were vibrating out of her skin.

“Don’t try to police me,” Ani said through clenched teeth. “I’m not a child.”

Tai snorted, and Ani replied with an elbow to his arm. Now fifteen, she had been a part of their father’s smuggling operation since before she could walk. Father had taken her out with him on his runs and had never once expected her to stand quietly at his side during a negotiation. Then again, Tai did things a bit differently than Father had, and it was probably for the best. Maybe if Father had been more like Tai he’d still be alive.

She gritted her teeth and stilled the constant movement of her limbs, determined to try things her brother’s way. The interior of the warehouse smelled of mildew and mothballs. Mik, Tai’s first mate and best friend, had found it for them in a seedier section of the already-seedy docks of Portside. He’d stayed behind on the ship to ready it for a speedy departure. The men who stepped into the nearest cone of light were fellow Raunians, so Mik’s preparedness would likely come in handy.

Ani held back a snicker. This Bor fellow resembled the creature his name sounded like. Squat and meaty, with a piggish nose and deep-set eyes, he was just about the ugliest Raunian she’d ever seen. His hair was dyed the same blue as Tai’s and Ani’s, but Bor had done his in vertical stripes, alternating with its natural black, which lent him a deranged appearance.

Unsurprisingly, he had no marriage markings tattooed on his face. Aside from his siokka, or family crest, along with his captain’s and taxpayer’s tattoos, he bore five horizontal lines on his left cheekbone. He’d served five years of hard labor. Not a man to be trifled with.

Tai leaned against a crate, which towered several handspans above his head. His pose was casual and carefree, but only to those who didn’t know him. Ani could see that beneath his cool exterior he was on alert. Bor’s reputation as a hard bargainer had been well-earned. The presence of the three large men behind him hinted at exactly how he liked to negotiate. If they were going to make any money on this deal, and leave with their lives and limbs intact, they had to be vigilant. 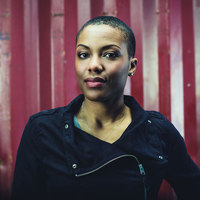 L. Penelope has been writing since she could hold a pen and loves getting lost in the worlds in her head. She is an award-winning author of fantasy and paranormal romance. Equally left and right-brained, she studied filmmaking and computer science in college and sometimes dreams in HTML. After living on both coasts, she settled in Maryland with her husband and their furry dependents. Sign up for new release information and giveaways on her website: http://www.lpenelope.com