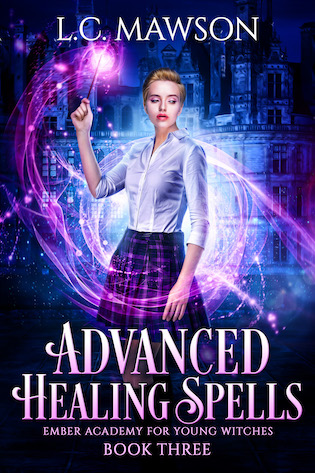 Keeping my head down shouldn’t be too hard… Right?

Unhappy with how everything with the Amazons went down, the Slayers are now investigating Ember Academy.

But not me. Not as long as I keep my head down.

Which would have been a hell of a lot easier if students hadn’t started dropping unconscious.

No one knows how to wake them, but I have ways to find answers that they don’t

Especially when it would mean reaching out to the very criminal the Slayers are trying to find.

There are lots of things that I’d gotten disturbingly used to since finding out that I was a Witch.

First and foremost probably being the fact that I’m a Witch.

But spending my dream-time psychically linked to an ancient Witch who almost killed me was definitely up there.

But it’s okay, we got past that.

It was an accident, and she was trying to help lift the curse she left on me.

And I was helping, given that there wasn’t much else to do when I arrived at her tower at night.

“Wait, hang on, stop,” I said as I realised what she was doing.

“What?” she said, huffing as she placed one hand on her hip, the other holding marigold flowers.

“You have to dry them first. You never use fresh marigold in a dermal solution.”

Maria ground her teeth a little, but she did pull out her wand.

“How are you considered one of the greatest Witches of history and you’re this bad at potion-making?”

“Because it takes too long,” Maria admitted as she waited for her drying spell to work.

I grimaced. That would work, but not as well as letting them dry naturally.

“I take shortcuts because I don’t have the patience for the long way, and then my potions are never that strong.”

I took some more marigold flowers from her supplies and removed them from the preservation spell, putting them out to dry.

This potion wasn’t going to be strong enough the way she was making it, so I might as well set up the next one now.

“At least you’re aware of your pitfalls.”

“Being one of the greatest Witches of history demands it. Especially if you’re neurodivergent. You can’t succeed when you don’t understand your limits, Amelia. Pushing past them will only harm you in the long-run.”

I folded my arms tight across my chest. “What if you don’t like thinking about the fact that you’re not good at something?”

She turned and gave me a reassuring smile. “Then that is understandable. But that’s one of those pitfalls that you really do need to acknowledge.”

I leaned back against the table I was standing next to. “Yeah, I guess…”

“For example, if you hadn’t acknowledged that you struggle with Light magic enough to have difficulty casting healing spells, you would have kept pushing yourself to succeed in using traditional healing spells, rather than focusing on your connection to Nature.”

“I don’t struggle with Light magic.”

“I stopped you from freeing your coven by focusing on Light magic.”

“I didn’t say that you can’t access it at all, I’m just saying that you seem to be favouring Dark magic. And why are you arguing? I thought you wanted to be a Dark Witch so that you could go to the Underworld and get your sister’s protection.”

“I’ve never been a fan of thinking of it in the binary anyway. ‘Dark’ and ‘Light’ were just terms that Witches made up because the Demons and Council of Light demanded that we be one or the other to work with them.”

Some say she’s an ancient creature of nightmare that was unleashed from beneath the ocean, come to devour the souls of men. Others say that she’s a cosmic being from the beyond the stars that has taken corporeal form to learn our ways for some unknown end…

In truth, L.C. Mawson lives in a tower in the middle of a haunted forest, far from civilisation and is definitely (probably?) not a witch who curses those who trespass upon her land. And she definitely cannot turn into a dragon that flies over cities in the dead of night and whose cries are often mistaken for an approaching storm. Where did you hear that? That’s absurd…

The only contact she has with humanity is publishing a book once a month, which is definitely just for fun and not part of an ancient contract with a trickster god.