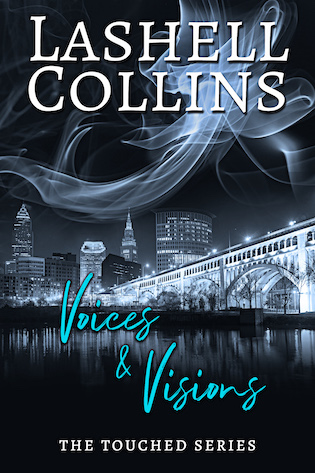 A psychic so powerful his abilities come at a cost. A woman so special she alone has the power to touch him.

Detective Isaac Taylor is a broken man. Isolated by his strange abilities and what others perceive as weird behavior, he keeps his head down and excels at his job. But he hears the whispers of his colleagues and family members, and he feels like a freak among them. Then one wrong number phone call changes everything.

Sidney Fairchild is no stranger to danger. She’s a woman on the run, in hiding and existing below the radar. Despite her efforts to stay invisible, she witnesses a crime she knows could get her killed. Then she answers a wrong number phone call that changes her life.

Bound by their undeniable connection, Isaac and Sidney forge a bond stronger than anything either has ever known. But will his psychic abilities save her or lead to their mutual destruction?

Voices & Visions is book 1 in Touched, a new romantic suspense series. If you like compelling characters, realistic dialogue, and heartwarming bromances, then you’ll love this new thought-provoking series from Lashell Collins.

“Can we talk about what happened back at the safe house?” she asked, finally breaking the awkward silence.

“I’m not sure rehashing that shootout is such a good idea, Sid. It’s only going to make you feel lower than you already do.”

“Oh.” He glanced at her again and knew immediately what she wanted to talk about.

“When we met at the restaurant and you shook my hand… you saw something then, didn’t you? That’s why you looked at me the way you did.”

The intrigue in her light brown eyes held his attention captive for a moment, but the certainty in her voice told him there was no point in trying to sidestep her question. He pulled his gaze away from hers and swallowed.

“Yeah, I did.” His reply was quiet, resigned to the notion that their earlier conversation on this subject wasn’t quite finished.

The images came back to him in technicolor, every detail crisp and fresh in his mind. But he knew he couldn’t tell her about them. Not until he’d had a chance to sort them out. He couldn’t tell her that the flashes he’d seen involved him. Involved them. Together. Scenes from their future presumably.

But what was it they always said in those science fiction shows he and Adam loved to watch as kids? That the future wasn’t set in stone, and any glimpse of it was just one possible outcome.

Of course, that was science fiction. This?

He had no clue what the hell this was. 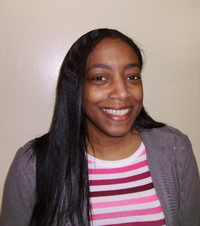 Lashell Collins is an American author of romantic suspense, paranormal romance and rockstar romance. She walks to the beat of her own drum, but that’s okay ’cause she’s got a pretty good sense of rhythm. Basically, she’s a geeky, quirky, laid-back, rocker-loving kinda girl who’s married to a retired cop, motorcycle-riding, bad-boy alpha all her own, and she likes to write about sexy police officers, werewolves and rockstars, or some inventive combination of the three!

When she’s not busy tapping away on her laptop and living vicariously through her characters, she can usually be found watching Grimm, rocking out to Slash, stuffing her face full of Chinese food, or riding on the back of her husband’s Harley-Davidson. Between her book characters and the ones she knows in real life, her plate stays pretty full. But she loves to hear from readers, so give her a shout sometime!

One thought on “Book Blitz: Voices and Visions by Lashell Collins”